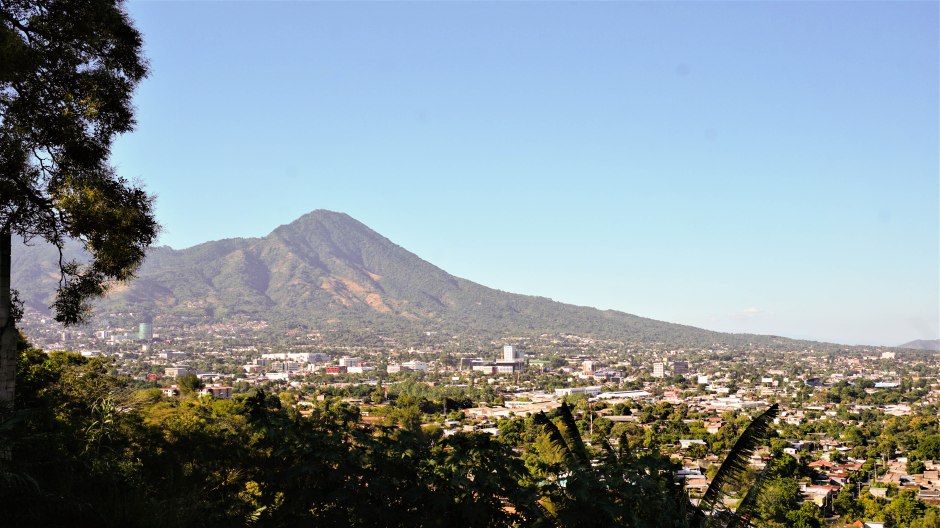 Never in my wildest dreams had I thought I would land in El Salvador and attempt to explore it. On our flight back to New York from Costa Rica, we had layover in San Salvador, the capital of El Salvador. We took the 8 hours long layover as an opportunity to have a glimpse of life in San Salvador.

The only things I had ever heard about the infamous El Salvador country were it being a major drug trafficking and mafia haven. I was about to get a reality check.

It so happens that the government has started making conscious efforts to evolve tourism industry in the nation by offering short tours of San Salvador and the area around. A booth at the San Salvador International Airport is run by government employees who provide guided tour information, take reservations, get you through immigration and assign a qualified, knowledgeable and safe guide along with a van and driver. A four-five hour tour cost us $40 per person.
Our guide, named Guillermo A, initially lived in Canada for a decade before returning to his home town San Salvador. So fortunately he spoke fluent English and not to mention exceptional Spanish. He was entertaining and well versed with the history of the city.

We were surprised to know that El Salvador and Costa Rica weren’t too different in terms of geographic diversity. El Salvador has active volcanoes, waterfalls, beaches, national parks and a beautiful wildlife other than coffee plantations. Just like neighboring Central American countries. The only difference is that Costa Rica has a thriving tourism while El Salvador sits avoided by tourists. Well that, and the fact that Costa Rica is much more expensive than El Salvador.

San Salvador is the most populous city of the nation and home to half of its wealth. It sits at the base of San Salvador volcano which is known to be active (our guide said it is scheduled to erupt in the year 2017). Like any other city in this world, San Salvador has two sides to it – a posh developed area with malls, theaters, restaurants and the other a market center flogged by local residents, businessmen, traders, merchants, vendors that basically comprise the middle class layer. They don’t have a local currency, they just use US dollar for all transactions. However, the cost of living is quite low making the country count as an ideal destination for budget travelers.

Did you know, the coffee you drink at Starbucks and McDonald’s, comes from El Salvador? The country produces world-class gourmet coffee beans and the largest consumer of this quality produce is US. Ironically, there are Starbucks outlets in El Salvador that serve the coffee distributed by Starbucks, US, which is originally produced in El Salvador. No difference in cost!

The city is flooded with history. Almost every corner bears evidence of the horrific communal wars and the earthquakes that crumbled the city to smithereens. Emblems, statues, monuments spot the city pulling the crowd towards it in a desperate need for attention. Sadly, these places aren’t maintained very well. Debris lined almost every street in the city.

Anti-riot squad and cops stand guard at every other block to ensure tourist and general public safety. If you pass by them, they nod to acknowledge your presence as a tourist and probably keep an eye out for possible trouble.

Amidst all this stands a church that looks insignificant and abandoned from the outside but once inside, makes you forget where you are. Iglesia el Rosario is one of kind church with unorthodox architecture and design unlike any other establishments in that era. The windows are a combination of abstract art and stained glass while the walls have vertical angular slits that makes way for natural ventilation. This church has survived over 4 major earthquakes that devastated the city. Not just that, the wars that took place in the city bore bullet holes into the gates and doors of this church, making the war scenes come alive as you hear the stories.

Number of churches can be spotted in the city, each one having its own chapter in history.

At the end of the 5 hour tour, our guide took us to “Pupusaria”, which means the food joints where Pupusas are made. Pupusas, one of the staple foods in El Salvador, are grilled rice flour pancakes stuffed with combinations of beans, cheese and pork, served with pickled veggies (very much like Kimchi). We ended up eating four Pupusas each, not just because we were starving, but because they were nothing like anything we’ve had before, not to mention incredibly delectable. Plus it was a freaking steal to get $2 per Pupusa and $2 for a local beer. Absolute must try!

With jaw-dropping landscapes, there’s real potential in this country, and I think with some efforts, the tourism industry can pick up in the upcoming years. Tourist safety and development of target areas can boost tourist traffic in the country and make it just as, or even more, popular than its neighboring nations. This country is a definite fit for budget travels.