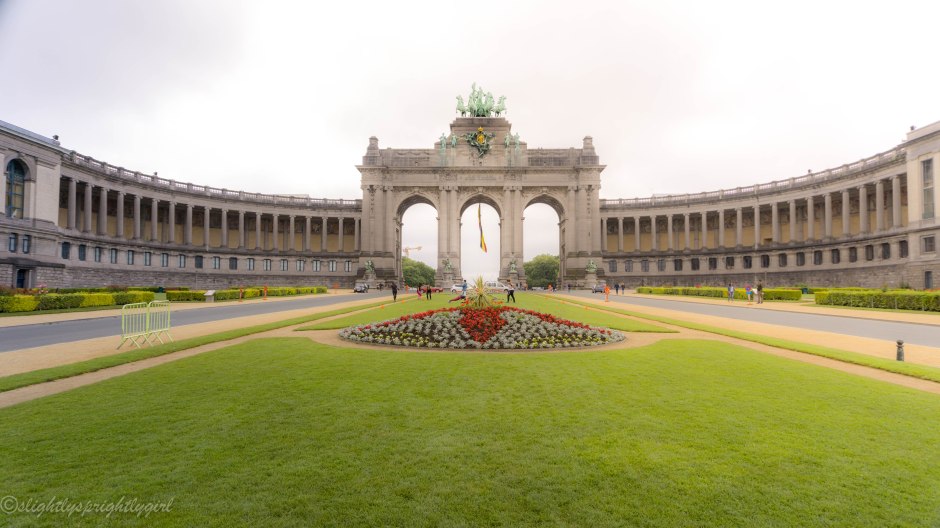 I had an impression, for only god-known reasons, that Brussels is an unusual vacation destination. I expected a low key city vibe, dispersed tourists mainly comprising of the backpacker species. Maybe a restaurant here and there, a few decent shops and some handcarts selling waffles. Hoping to imbibe the World War history, I headed towards Brussels. But when I actually set foot in this city, I was proven wrong , oh-so-wrong, by the swarm of tourists I encountered everywhere. And not just that, the carefully preserved architecture (at least the grandiose facade), the opulent shopping malls and palatial Cathedrals, all of these were like a slap in my face to awaken me from my insipid imagination. What was I thinking?

Besides that, I was right about a few things. I knew I could expect a Cathedral, a bunch of museums and a Triumphal Arch.
Why?
Because it’s a European city! Duh!
Anyhow, I’m very pleased and a little proud to mention that in a span of just over 24 hours in Brussels, I spent on nothing but food and drinks.
How I did it you ask?
I explored the city on foot. I stuck to a list of “top things to do in Brussels” that didn’t require tickets. I didn’t fall prey to tourist traps. That’s how I did it!
So here I am sharing my list of FREE activities to do in Brussels / Bruxelle for all my fellow budget travelers. It’s not an exact itinerary, some places are closer to others, some may be a bit further away. Just listed them in order of my favorites first.

In the heart of Brussels, there is a vibrant market square encircled by historic buildings, where early merchants would trade their goods and town residents would flock to purchase for daily needs. This square is the first thing you must see when in Brussels because you will walk through the old town streets, what feels like a maze, to reach the square. The city hall (stadhuis), city museum (Museum van de Stad Bruxelle), restaurants and the beer museum fence the square. Visitor’s Information can be found near the city hall. If you’re ok spending a few Euros, take a quick tour of the Belgian Beer Museum next to the city hall.

Royal Museum of the Armed Forces and Military History

I’m a sucker for World War history. As sad as the history is, it is truly fascinating and intriguing. To be honest, we didn’t plan to visit this museum. We just stumbled upon it. And I’m glad we did. I was secretly hoping to find signs of the aftermath of World War, to see it with my own eyes, even if it was as slight as a scratch in a wall.

Flanked by well-kept gardens and fountains, this Triumphal Arch is a typical European monument. The arch proudly flaunts a crown of On one end of the arch is the Royal Museum while on the other is the Autoworld. Even though there’s no activity as such that you can do at this spot, it’s a phenomenal piece of history that you should witness.

The pissing statues are the main tourist attraction of Brussels. Rumour has it that the statue was built in honour of a kid who accidentally pissed on an live grenade, diffusing it completely and thus, saving the town. I’m not sure about the validity of this rumour. There are two more statues of a girl pissing and a dog pissing on a hydrant that aren’t quite as popular, for reasons unknown. Frankly, I don’t know why the Manneken Pis is such a big deal because I hardly found it interesting. While other tourists crowded around to take pictures, I was happily hogging on some of the most scrumptious waffles from nearby shops, after gawking at them for hours.

Delirium Cafe
Ain’t no party like the Delirium party!

We happened to be in Brussels during FIFA World Cup and you can’t imagine how religiously people follow football in Belgium. Almost all the sports bars, pubs were jam packed. We walked to Jeanneke Pis to see the statue, but what we came across was a wild wild party at the this quirky hangout place called Delirium Cafe. It wasn’t a rave party or anything, just drunk and happily dancing, merry-making horde of tourists. Some celebrating a FIFA win, some chugging beers on a dare, some having mad fun at their bachelor/bachelorette party. There was no place to sit, or stand, but the vibe was so infectious, we caught it instantly and joined the party. The verdict is, Delirium beer is one of the best beers I’ve ever tasted. And the parties there rock!

A palatial shopping mall full of high-end shops, designer brands, gourmet restaurants and exquisite chocolatiers. The arched glass roof of the mall made it fit for a royal, although I don’t know if the royals actually come for shopping here (None of my business!). I hopped from shop to shop looking for gourmet confectioneries and I’m happy to announce, I have a couple of favorites that I would like to share with you. You absolutely have to stop at Le Belgique Gourmande for chocolates and Delices Du Roy for some melt-in-your-mouth Macarons. Even if you don’t like sweets, just pop in and see the kind of display they have. You’ll be amazed to see sweets treasured like gold and diamonds.

One of the many cathedrals in Brussels, this one is a particularly gothic-style monument. Interestingly, this is the cathedral of choice for the royal weddings and funerals in Belgium. We loved the architecture, the sculptures, the stained glass art on windows. Fortunately, it’s not as crowded as other tourist spots.

Although I don’t have a good picture of this sight, you have to trust me when I say it’s a decent spot to visit. Not to mention, its FREE! The gardens are pretty well maintained and make for a beautiful evening stroll.

Leaving you with these pics of yummy Belgian waffles I devoured. There are a few museums, Palace of Brussels and the Atomium that charge an admission fee to visit. They’re interesting to see if you have an additional day in your itinerary.
Happy travels!